There were some signs of a possible Google search ranking algorithm update that touched down on October 6th, spiked a bit more on October 7th and is fizzling out today, October 8th. The tools are not as insane as with this past weekends update but there is more chatter this time around.

This is not confirmed, so it is hard to say what this update was about or if it was just specific niches or something else. But not only did the tools spike, not only did I see chatter in the SEO communities, people reached out to me directly to see if there was an update as well. The chatter seemed to have died down today but it is still early.

Let’s start with the SEO chatter from the forums, I’ll leave out the tweets and emails I received. I’ll just quote from WebmasterWorld starting around October 6th:

10am USA traffic shut off and down to almost zero for two hours…back to the same BS June patterns again. Is anyone else seeing this with their USA traffic?

USA traffic still way off for me, down 48% today at noon. Mostly due to the fact that my ranking has dropped for high-volume terms to my most important landing pages.

Traffic from Western Europe still far below normal, almost non-existent. UK remains strong, AU has reappeared but CA has vanished. With Google these days they always make sure that your traffic is never firing on all cylinders.

Seeing a return of the drop in USA traffic in the middle part of the day again. Starts in the morning and traffic remains very low for hours. Back to the old June patterns…

For me traffic has fallen off the cliff edge today with hardly any multiple page view visitors.

Over the last few weeks I have also seen many, many visits by Singapore, Huawei Clouds.

Yesterday was my worst traffic day in years. Gulp!

Today is starting off as a train wreck, despite ranking being higher…USA down 31%, UK down 56%, UAE down 27% and so on. Many of my most important landing pages are down 30-65% if any visits at all. Google is changing the page layout significantly…adding more ads at top and throughout the page. I don’t see users really liking such a disordered page, it’s like going into a store and asking for one thing and being shown twenty other items before they show you what you asked for.

All competitors I am tracking are down today with only one exception, me lol I am in the same position as I was yesterday but the biggest volume keywords were targeted and pushed down the serps. Some low volume keywords improved. The algorithms constantly target high volume keywords

The tracking tools are mostly all showing a shift in the Google search results, not as high as this past weekend, and honestly not even that significantly high. Some, like RankRanger seem pretty calm – but let me share the charts with you so you can see yourself. 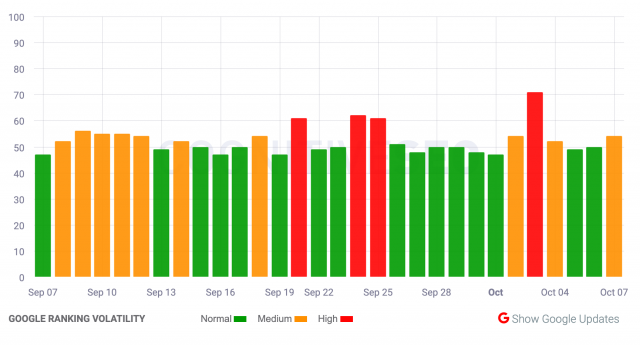 So if you saw any ranking fluctuations over October 6th through 8th – you are not alone.

Want to bet if we will see ranking fluctuations this weekend?

Google is More Hesitant To Send Users Out Into The Web

Cyber Monday broke records this year, with almost $12 billion in US sales