At some point, I should just report when there is not a Google search ranking update on the weekend. Because it seems like every weekend the tracking tools spike and the SEO chatter increases around some sort of update. But why so often on the weekend?

Here are the past Google updates I reported on, labeled weekend or weekday:

That is just the past couple of months or so – scan through my archives and you’ll see a good percentage of them seem to be on the weekend.

Maybe Google approved them in a launch meeting on Thursday/Friday and it takes a day or so to be noticed, which happens on the weekend? I am not sure. Maybe Google’s rankings change for the weekend and shuffle things up? That sounds kind of wrong. I don’t know.

So like I said, the chatter started around October 8th and continued through the 9th and even the 10th. Here is some of the chatter on WebmasterWorld:

Much more normal multi page visitor patterns for me today however still lots of bot activity hitting solely the index page then returning a couple of minutes later to the same page and that’s it. I’ve been getting these from several countries for awhile … anyone else?

Traffic remains very poor, although USA traffic was normal today while UK, Canada, Australia, France, Germany, Brazil and others way down at -28% to -66%. Home page and landing pages still much lower, even though my ranking has been higher for most of this week.

Despite rising in the rankings for another day, traffic is now disastrously low. Search is -49% this morn, USA traffic is -61%, UK is -70% at 10am. They’ve been rolling out the page changes with so many new ads and features that organic is almost useless now. I don’t see how this will not affect users as the page is just a jumbled confused mess. Most people simply do not want to click ads that are shoved in their face, so I can’t see that they won’t start abandoning Google search with so much garbage on the page. Why is Google devoting so much of 1st page results to Twitter posts?

My backlinks dropped at the same time the rankings dropped. I only lost rankings for converting keywords, pushed down to position 80. What mattes is the number of impressions and not rankings itself. My impressions are down 40% today, huge. I hope in the next few days it will recover.

Traffic yesterday was insane…starting off extremely low, then suddenly surging for the rest of the day.

During this surge I had three new customer inquiries, more than the entire previous week when traffic was just awful. Today traffic is at mostly normal levels…how long will that last? Google’s new norm is having your traffic vanishing more than 50% of the time, there is no more relying on any stable period of traffic from Google.

I think the update on October 6th and 7th was a very big update. Our lowest traffic level ever was on October 9th. I can only hope that it doesn’t stay that way. For some keyword areas, the top 10 have been completely exchanged. We had seen it before in July, when it was taken back after a short time. Google has probably continued to work on it and has now rolled out this update again. I hope google is not happy with that. Whenever things go up, google comes up with the idea of ​​taking a piece of the cake from us…

Here are screenshots of the tools, some may update again soon, so I will try to update them later today so you get a fuller picture. 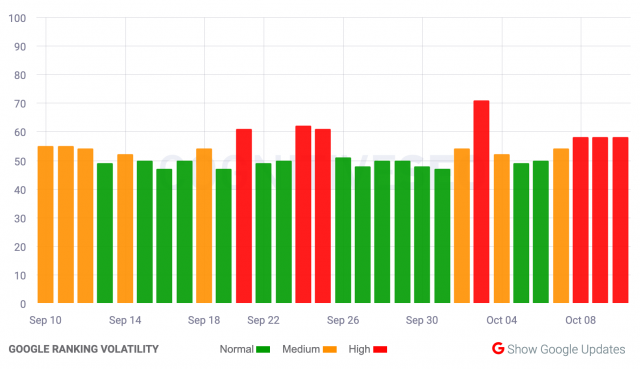 Did you notice ranking changes this past weekend with your sites? And why do you think Google is so active over the weekends?

I am hearing some chatter that what happened on October 6th was reversed with this update.

Social Media KPIs You Should Be Tracking

How to approach SEO in a period of global disruption